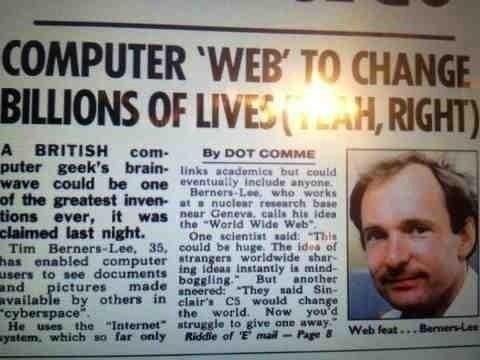 It is supposedly from the front of The Sun newspaper – and clearly demonstrates how ignorant they are. People were only too happy to re-tweet the ignorant, bigoted journos that write for the sun.

But it seemed a bit fishy to me. Firstly, I’m always suspicious of a popular RT that seems just too good to be true. Secondly, what is that bright bit? It looks like a reflection or a light or a camera flash…but newspaper is hardly reflective, and 20 year old news paper is not that white. Finally, this is a photograph taken of something vertical – on a screen or a wall. It isn’t a photo of a newspaper that someone “stumbled” on, put on a table/floor and took a picture of.

I mentioned this on Twitter, and CJ (he has a locked account) sent me a link to the full page. A full page digital layout? From 1992? That is a little suspicious. 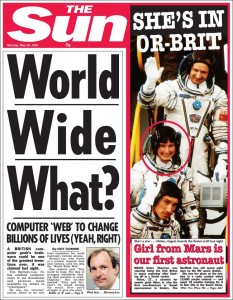 A thorough Googling revealed no other digital versions of The Sun from that era – and very few from later years. But what I did notice was that the Mast Head (the red bit at the top) from the early 90s didn’t match this one.

Also, the date (again, thanks to CJ for noticing) was May 1991, but the first website wasn’t published until August 1991. Although plans for the early web had been in progress earlier, would this really warrant half of the front page of a gaudy red top? The space on the front of The Sun should feature a scantily clad starlet or a disgraced politician. Ideally both together.

Finally, a bit more Googling showed that I was very late to the debunking party and that it had already been discredited on Reddit.

Interestingly, Reddit told me where the original had come from, and it was somewhere that I had found very early on in my search…but I had discounted it because it came from The Sun, and I wasn’t prepared to trust their ignorant, bigoted journos.

The original article came from The Sun – it was a spoof article written for Hold Ye Front Page (warning, this is a link to The Sun, and I know many of you refuse to visit their site).

So, two lessons to learn here. If something looks too good to be true, it is probably worth checking before retweeting. Secondly, just because the source of a piece of information is sometimes bigoted and unreliable doesn’t mean it should be automatically discarded.

3 Responses to World Wide What?