What is on this Russian box?

Does anyone know what is depicted on this Russian box. It is about 18 x 8cm in size, and the picture is lacquered to the lid.

This ticket was in the box. Can anyone read Russian? 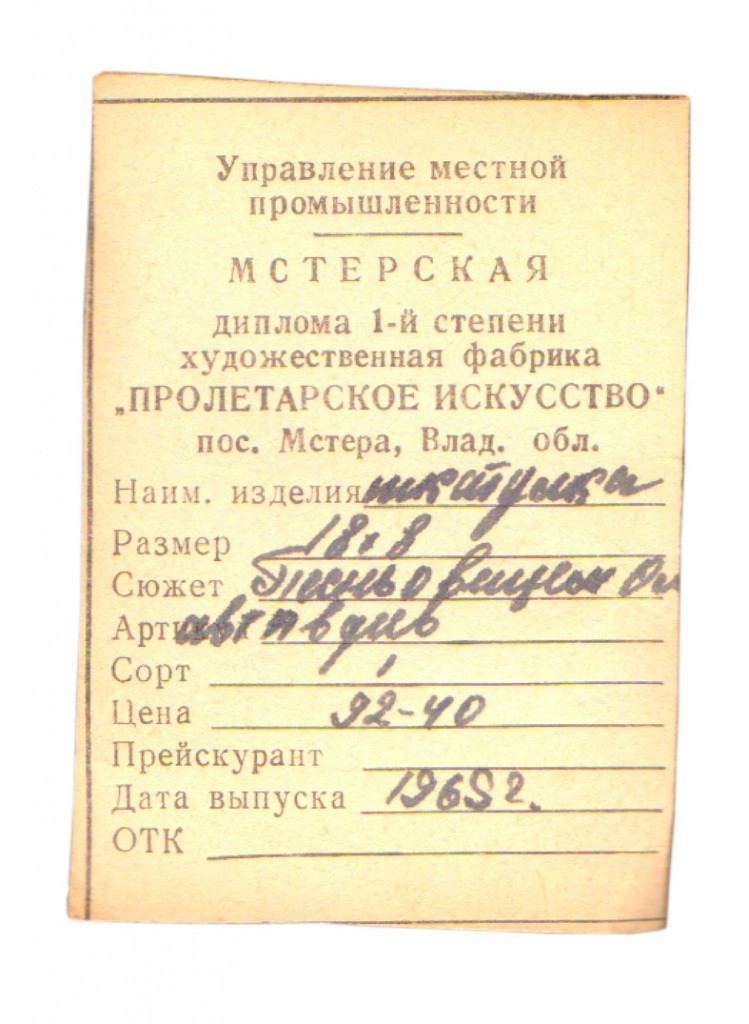 Update – thanks to Twitter I have managed to find out who is on the box, and where it came from.

The box is a Mstyora, (or Mstera) originally made in the Russian town of the same name. Wikipedia has this to say about it:

Mstyora (or Mstera) miniature (Russian: Мстёрская миниатюра) is a Russian folk handicraft of miniature painting, which is done with tempera paints on varnished articles mostly made of papier-mâché.

Mstyora miniatures appeared in the settlement of Mstyora (in modern Vladimir Oblast) in the early 20th century on the basis of a local tradition of icon-painting.

This artel was turned into a factory in 1960. The Mstyora painting technology was borrowed from the Palekh artists.

Mstyora miniatures usually represent characters from real life, folklore, and literary and historical works. Warmth and gentleness of colors, depth of landscape backgrounds (often with blue dales in the back), small size and squatness of human figurines, and subtlety of framing pattern done in gold are typical.

Interestingly it seems that after the Russian revolution, religious icon painting was banned, and these Mstyora were the icon artists’ new means of making a living.

The box itself features an illustration called “Song of Wise Oleg” which is the name of a ballad by Alexander Pushkin. It tells the tale of Oleg of Novgorod, a prince who ruled all (or part) of the Rus people in the early 10th century. It is based on the legend that (according to Wikipedia)…

it was prophesied by the pagan priests that Oleg would take death from his stallion. Proud of his own foretelling abilities, he sent the horse away. Many years later he asked where his horse was, and was told it had died. He asked to see the remains and was taken to the place where the bones lay. When he touched the horse’s skull with his boot a snake slithered from the skull and bit him. Oleg died, thus fulfilling the prophecy.

I think the illustration itself is by Alexey Mikhailovich Kosterin, a miniature artist, born in the village of Kholuy in 1929.

So there you have it – the mystery of the Russian box, solved. I am especially grateful for tweeters Alexey Melnikov (@aamelnikov_chal) and Jeffrey Smith (@jeffreysspsmith) for their invaluable help recognising the type of box, and the artwork on it.

2 Responses to What is on this Russian box?