Pfeilstorch – is there really a German word for everything?

If you’ve ever stopped and wondered “is there really, really a German word for everything?” Well, yes, apparently there is.

Once upon a time, people in the Northern hemisphere were baffled by the apparent disappearance of (migratory) birds. Where did they go? Greek braniac Aristotle even suggested that they might hibernate at the bottom of the sea. Little did he know that they flew halfway across the globe to somewhere a bit warmer.

Very occasionally certain large birds (it has been suggested that smaller birds couldn’t have survived the er, encumbered flight) would appear with a spear through them. An African spear, from half a word away. 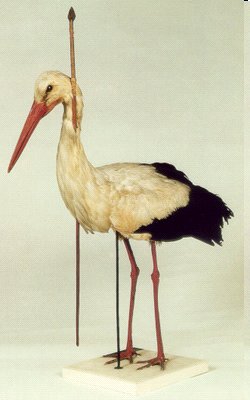 A white stork, shot on the Bothmer Estate near Mecklenburg, was discovered with an 80-cm-long Central African spear embedded in its neck. The stork had flown the entire migratory journey from its equatorial wintering grounds in this impaled state. The arrow-stork, or pfeilstorch, can now be found, stuffed, in the Zoological Collection of the University of Rostock. It is not alone. Since 1822, some 25 separate cases of pfeilstorches have been recorded.

So there you go – there really is a German word for everything.