I’m been planning to do this wander for months, but had to wait until the leaves were off the trees. Unfortunately that means winter, and the light isn’t great so the photos aren’t as vibrant as I’d like.

Still, let’s begin. This is Cliff Road, as viewed looking East from the tram bridge. It runs parallel with High Pavement, but about 3/4 storeys lower. It runs East to West from Middle Hill to Malin Hill – ancient entrances to the city, and incorporates Long Stairs which are said to date from pre-Roman times. 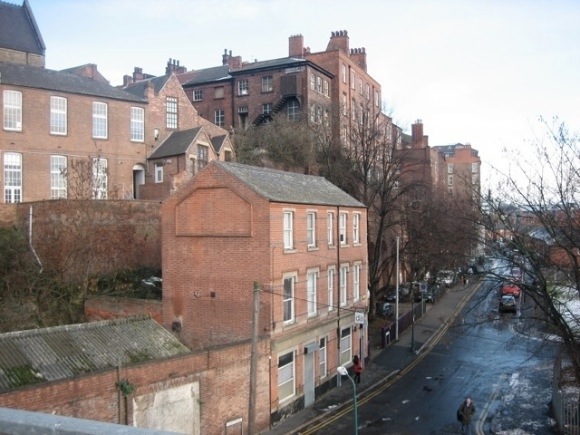 Down on the ground, the height of the cliff becomes a little more obvious… 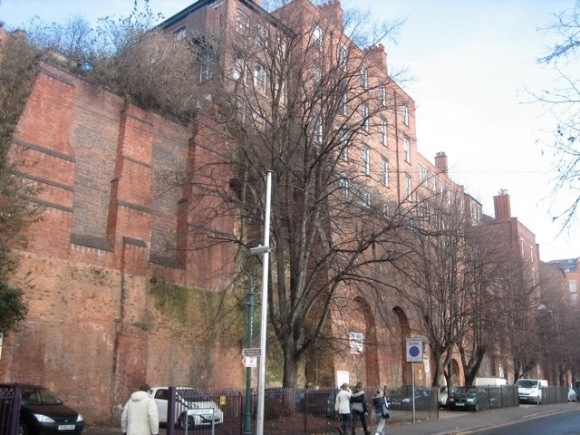 …and it becomes apparent how many times this area has been build and rebuilt. 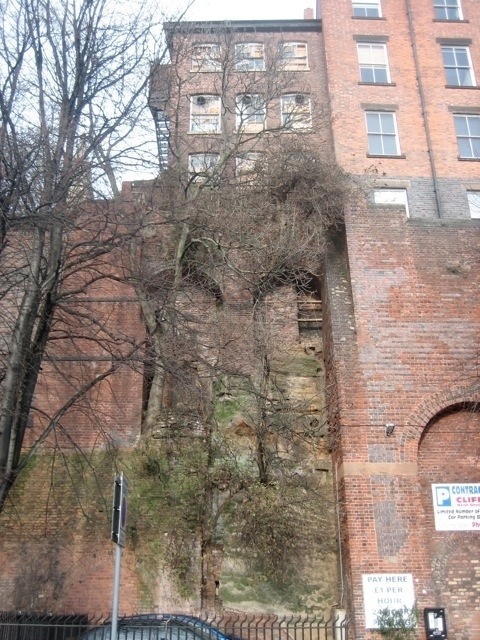 Even a close-up of this doesn’t shed much light on what was originally here. 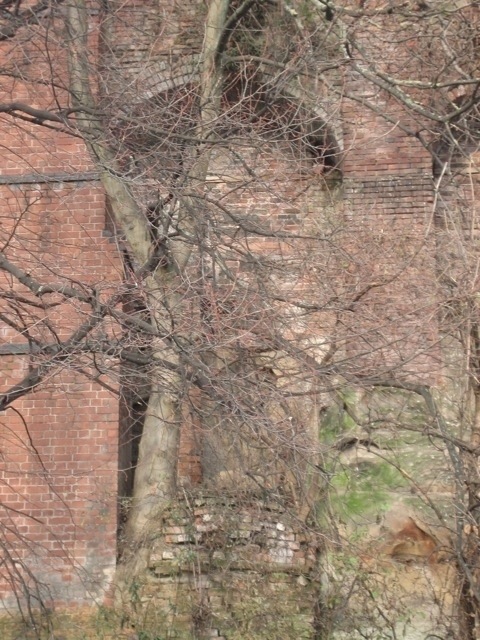 A little further along, a car park stands below several bricked-in archways. 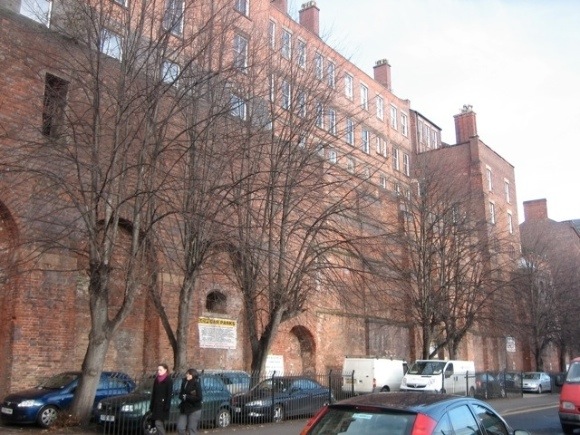 This one features a heavy duty grille. I wonder what is behind there. 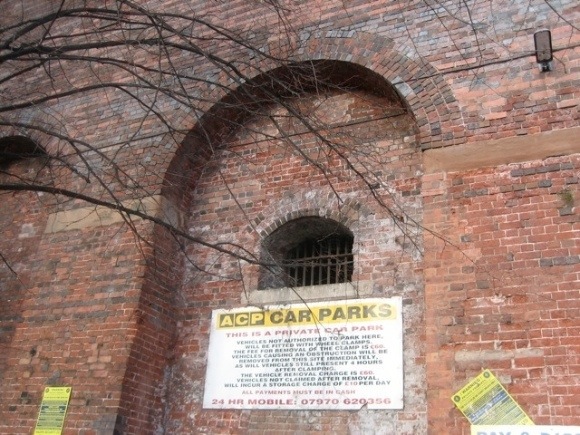 And this one seems to have featured both a doorway (right) and a fireplace (left) at some point – though presumably not at the same time. 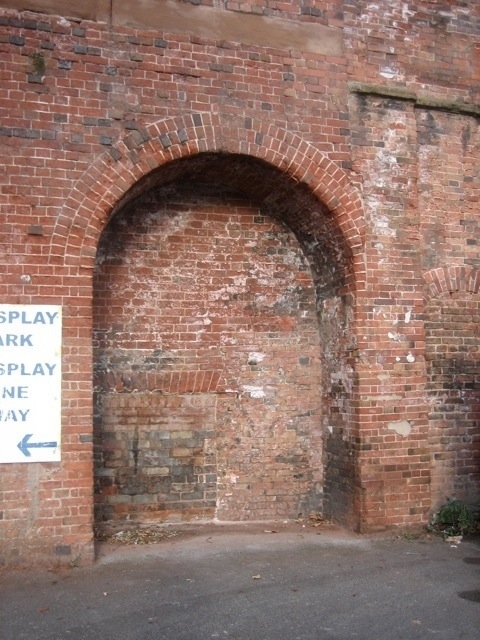 Moving along, this is the back of the Shire Hall, the old court and gaol on High Pavement. 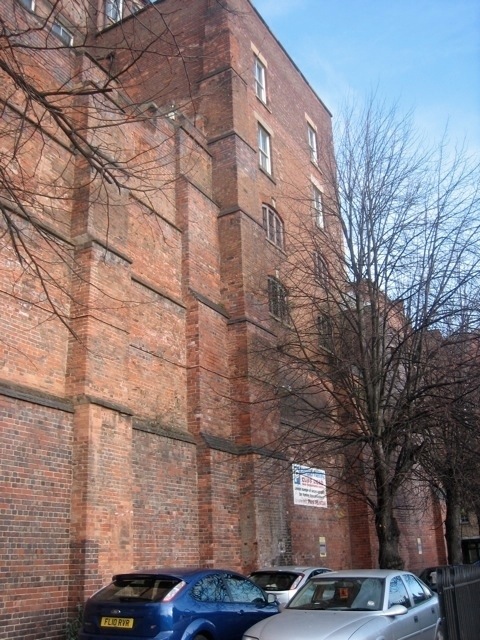 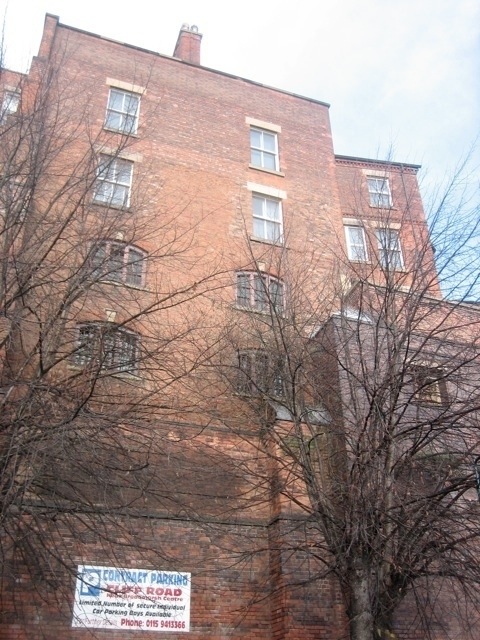 …but these lower windows – double barred – probably had a far bleaker prospect. 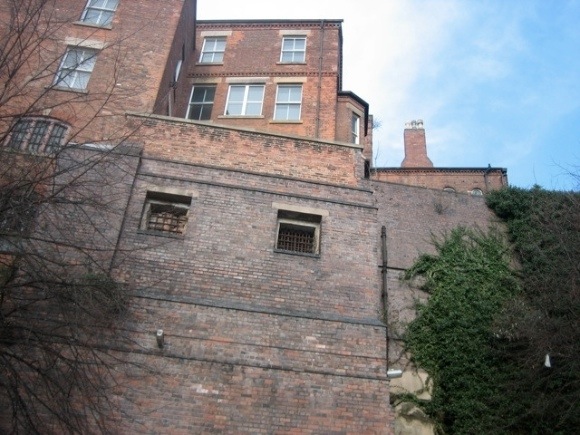 It was said that in Victorian times that the Shire Hall was “The only site in the country where you could be arrested, sentenced and executed.” 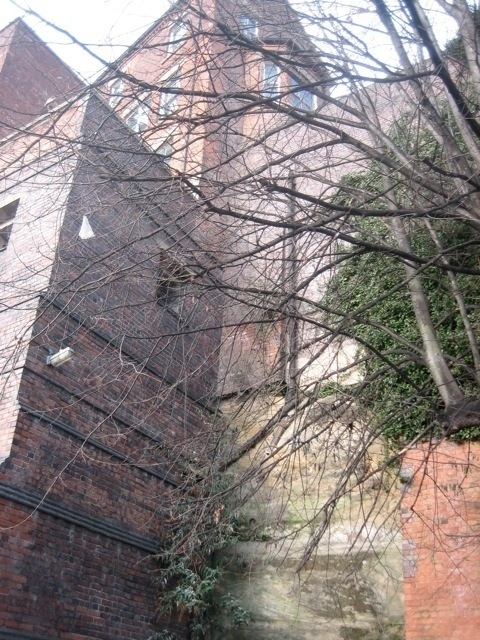 Moving on, we can see the back of 26-28 High Pavement (left) which has it’s own cave cut into the cliff. The elegant looking building on the right, isn’t visible from High Pavement, except through a gate into its courtyard. 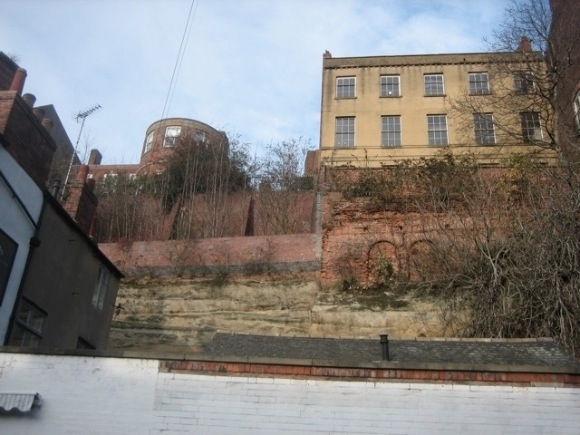 Moving on, we come to the rear of some of the buildings that form Commerce Square… 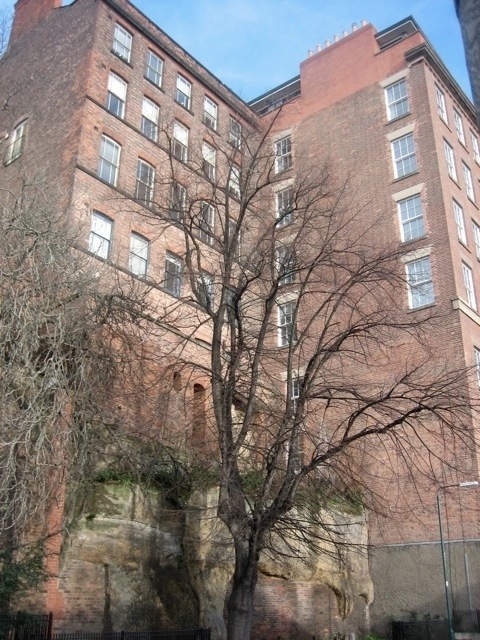 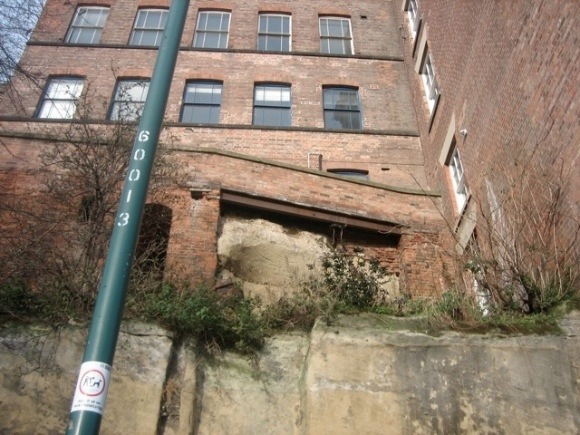 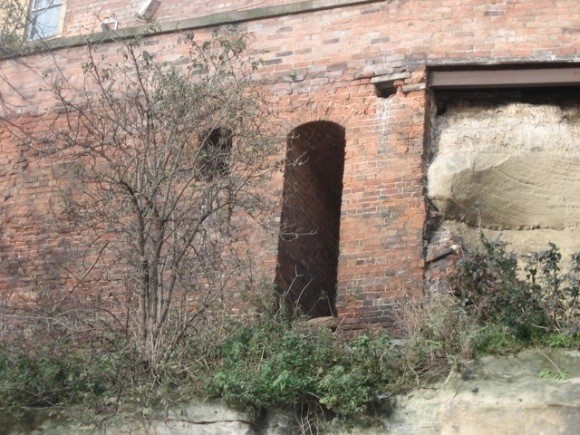 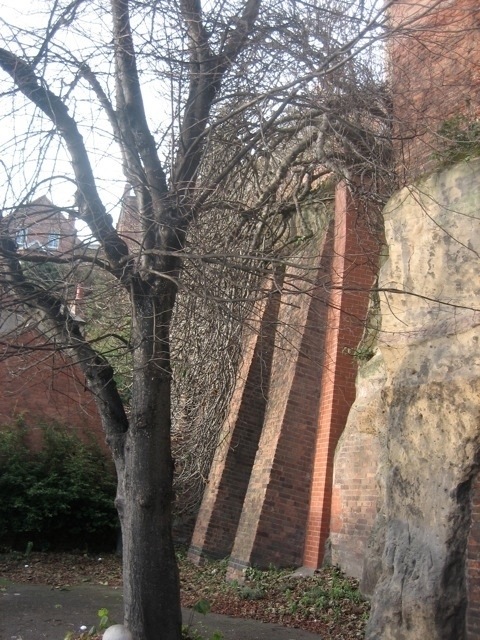 Moving further along, the road moves away from the cliff, but it can still be seen between private houses.

Just visible on the left photo are the Long Stairs, and on the right, Malin Hill beneath the bricked-in windows. 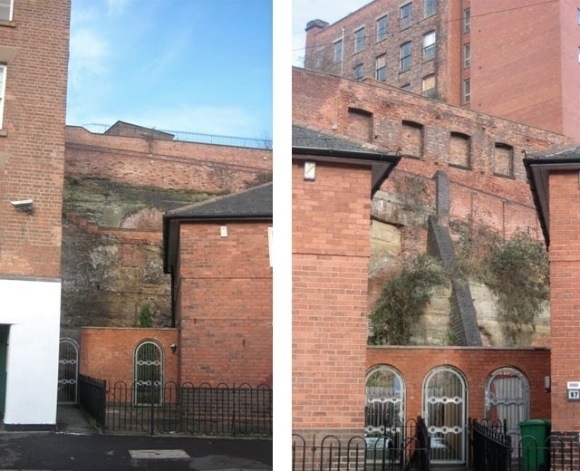 As the road loops round, we face the cliff to the West behind some houses – the walled Malin Hill forming a diagonal line from top left to bottom right beneath its bricked-in windows. 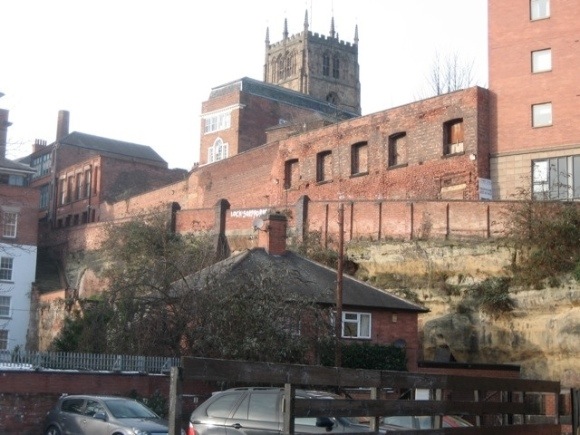 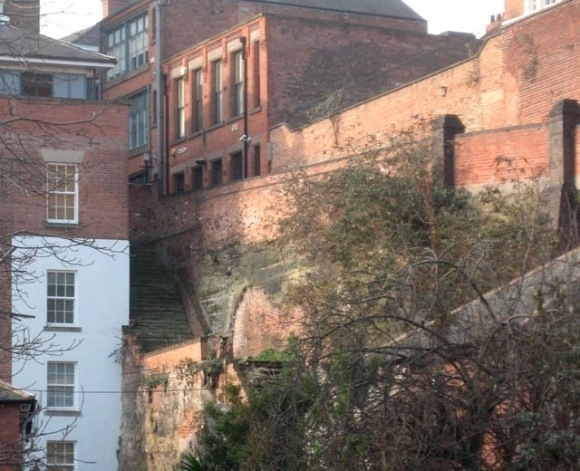 Walking along Malin Hill back up to High Pavement – the wall to the left, bricked-in windows above. 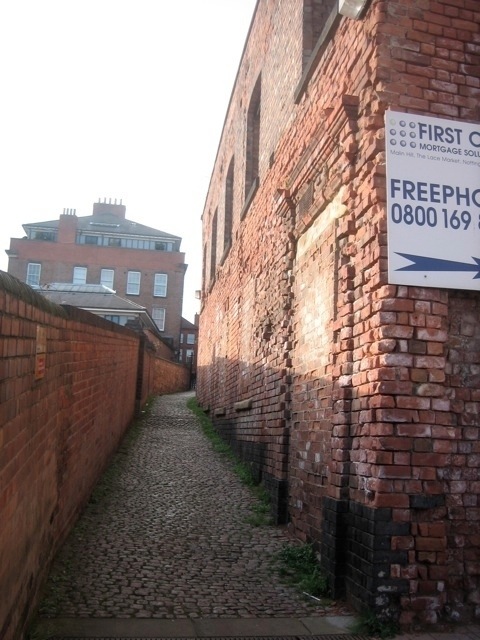 The remains of a carved brick doorway in the wall. 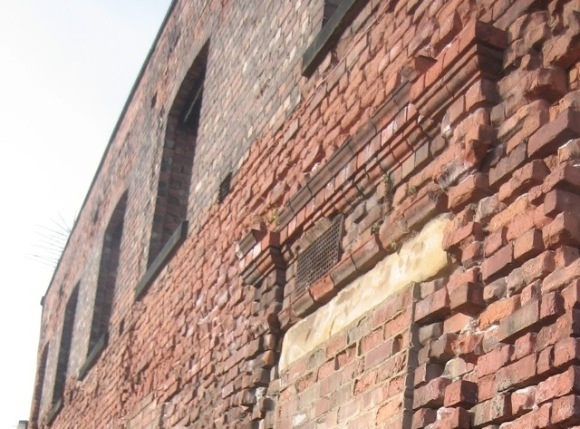 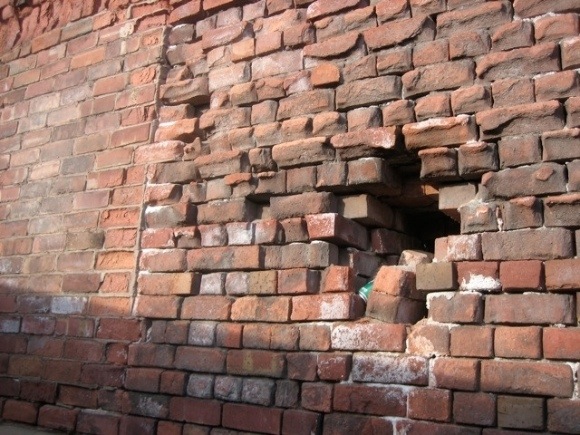 Carrying on up Malin Hill… 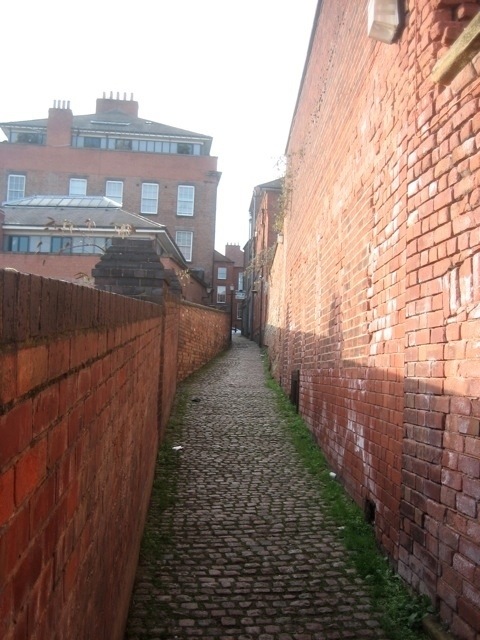 ..there are more signs that this was once a rather busier and more important thoroughfare – now blocked off. 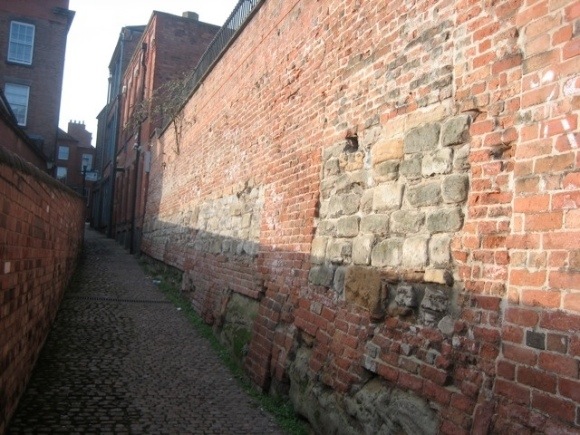 And finally, the view down Long Stairs. I know I’ve covered them before, but their age and their sad neglect – demolished at one end, gated at the other – always intrigues me. The tree stump barely visible in the centre of the picture is probably one of the half-dozen fig trees that once clung to life on the cliff.

This picture, and some some other hidden gems of Nottingham can be found at Justonemorething 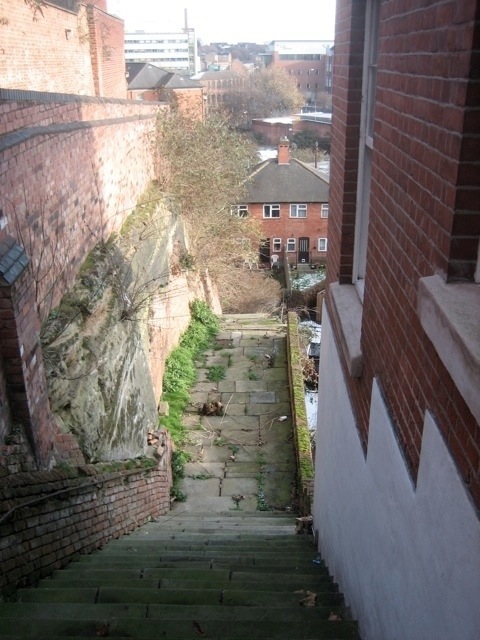 That is all – I hope you have enjoyed this rather un-glamorous wander.

This entry was posted in Uncategorized, Wanders. Bookmark the permalink.